Baseball, Boston and the Madness of a Mommy's Mind

We have all changed. It's just a new reality. Terrorist bombings at the Boston Marathon affected everyone I know. I haven't been able to watch the news for the past month without crying. Although I did not know any of the victims, it all felt too close to home. An 8 year old boy and three others dead (I have an 8 year old!). Runners maimed (I am a runner!). Lost limbs. Brain trauma. Pure evil. Heartache. I cried and cried. It could've been us. A week later, even after the two bombing suspects were apprehended (one dead, one hospitalized after a shoot out with police), my heart still hurt as much as the day it happened. And now, almost a month later it feels like the world is still in mourning.

Recently, on a very busy Saturday alone with my kids, I noticed how that event has affected how we move through the day (actually, that attack and so many other heinous crimes in the news lately; like the horrific murders of Kindergarteners and elementary school teachers in Newtown, Connecticut a few months ago). There is a constant threat assessment running through my mind now. As the day unfolded on this particular Saturday those dark, pervasive thoughts went something like this: While taking Miss Anabel to meet up with new friends (that she met at the Paella-making workshop!) to take the Rail Runner commuter train up to Santa Fe, I found myself wondering: "What if someone blows up the train?"

Next up, a stop at the Mother Load Children's Consignment Sale. I thought; "Very public. Everyone defenseless. Good opportunity for maximum collateral damage. Women and children."

From there we went to Ahava's gymnastics class. "Full of innocents. What if some crazy man came in here with a bomb or a gun? Unless one of the parents or other spectators is packing a concealed weapon of their own, there would be no one to stop them."

Then on to Ziva's tennis lesson. It felt a little less threatening, with double doors at the entrance and a guy requesting membership cards at the front. "But how easy would it be to overtake someone in the parking lot, grab their membership card and come in, guns blazing?"

Next up, the playground. While there were only a few kids on the playground on that day, I still found myself thinking: "If it were busier here some sicko might choose this park as a target."

Trips to K-Mart and Whole Foods had me scanning the parking lot for people acting strangely. "Was that guy really a security guard or just a guy posing as one to plant a bomb?" The parking lots were full; perfect place to create a big explosion for maximum news coverage and general panic.

And finally, the Isotopes' baseball game for a friend's son's birthday party. Talk about public. Perfect for murder and mayhem...

But here's the thing... While those thoughts were real and continuous throughout the day, they were small. Much smaller than the amount of time I dedicated to them in this blog post. They were nowhere near as strong as the other, constant mommy worries that I have been having all day, everyday, for the past 8 years since I became a mother. Running through the same Saturday, a small sample of those worry-filled thoughts went something like this:


Dropping off Anabel; "What if these new 'friends' aren't good people and have ill intentions with our foreign friend?" I'd never forgive myself if something bad happened to her.

At the consignment sale I worried that Samuel would pull one of the clothing racks down on his head or escape out the door and into the street in the 2.5 seconds I turned my head to help Ziva try on a pair of shoes.

At gymnastics I always worry that Ahava will land wrong and break an arm or a leg, or worse. 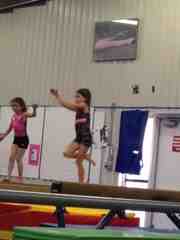 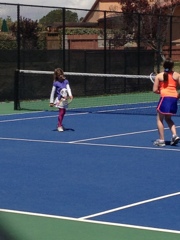 In tennis; "What if Ziva gets whacked in the head with a ball or a racquet? What if the obscene song that the little girl next to her (Not the little girl in this picture!) was singing or the spitting she was doing or the constant barrage of put-downs she was hurling at the other kids leads to similar bad behavior in my sweet, innocent little girl?" 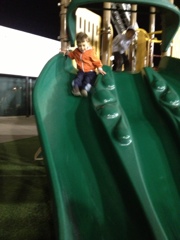 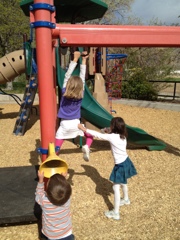 And, of course, both the playground and bike ride were fraught with worry. "What if Ahava or Ziva lose their grip on that swing-thing and break an arm, or a leg, or worse? What if the graffiti on the slide is legible smut that my daughters can read (now that Ziva can be added to the list of real readers since the reading lightbulb went off for her in just the last month!)? What if that puddle at the bottom of the slide is not rain water but some kid's (or adult's!) urine! What if these new bike riders lose control and barrel into traffic? What if I lose control and barrel into traffic? What if this new baby bike seat I so proudly installed myself with a Swiss-Army knife falls off with Samuel in it, sending him barreling into traffic?"

Oh and don't get me started on the ballpark! Just the sign informing us that we were sitting in the foul-ball zone conjured up all those YouTube videos about kids getting hit in the head and seriously injured... or worse. 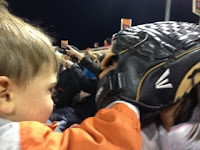 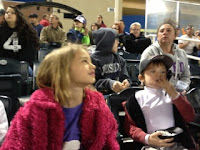 You get the idea. I worry all the time.

But, thankfully, not in the paralyzing way that prevents people from living. Yes, I worry about my kids' teeth rotting from all the candy they eat. I worry about them getting lost in a crowd. No, I don't allow my 8-year-old to go into the bathroom alone. And, yes, I still keep her in a 5-point harness carseat even though all her friends don't even use booster seats anymore. The reality is, if someone could document the moments of madness that pass through a Mommy's mind when it comes to worrying about their kids moving through the world, it would probably be a volume about the size of "War and Peace."

So, yes, we've changed, and, yes, those awful events make me worry more. But for me, when it comes to worrying I think it's kind of like pouring water into the ocean.

As I think about all of this, on the eve of Mother's Day, the word that comes to mind is "Courage." Not the kind of courage that is required to run into a burning building, or toward an explosion, or into battle to protect freedom and loved ones far away. That kind of courage is big, big courage in my mind. And seeing lots of first responders around the ballpark is a big part of the reason that this worried mommy enjoyed the Isotopes' game with my family and friends so much despite the recent sporting event bombing.

What I'm talking about here are the little acts of courage that have preserved our humanity through the worst of times AND the best of times. The courage to stay the course. To teach. To learn. To love. And to let go. The courage to help these little people believe in the good and the wonder and the joy, even as you yourself fear the dark, the cruelty, the pain. That, to me, is the courage that comes from being a parent.

I'll end with a few quotes about courage that I like, and a few of my favorite photos from the ballpark:

**Man cannot discover new oceans unless he has the courage to lose sight of the shore.        - Andre Gide

**This one I had posted in my cabin while living on Hakuna Matata! 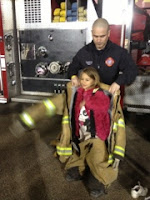 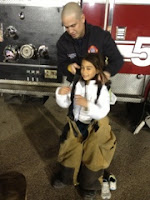 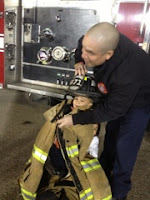