Paella as a Portal

We have a friend visiting from Mexico for a few months and we are all really enjoying having her here. My Spanish has improved tenfold in the month and a half that Anabel has been with us, and the kids are picking up a lot of the language too. The problem is that we live on 75 acres in "the boonies" (according to my Mom, at least) and she is a young woman who needs more of a social life than playgroups and potty training. Not to mention that the main reason she came here was to learn more English and because I have been so delighted to speak Español with her, I haven't been much help in that department.

Knowing I had no connections that would help a 24 year old meet other young, single people without kids (yes, the exact opposite of me!), I turned to the internet and connected with a Meetup group I had once attended. The group's home page reads:

Perfect! And, as luck would have it, they had a Meetup scheduled for tonight! Here's how it was described: 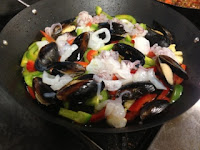 "Do you picture yourself cooking Paella? If you always wanted to know the secrets of making real Spanish rice, you will now have the opportunity. We’ll meet chef Antonio Luna who was born and raised in Seville, Andalucía, inside the kitchens of the National Hispanic Cultural Center. All the necessary ingredients will be provided. We want you to learn new cooking skills that you can practice at home, and that’s why we will only use local products. But not everything will be about learning ancient Iberian kitchen secrets. After we cook an amazing Paella, we will sit down and savor all of its flavors."

Of course, there were two problems with this plan: 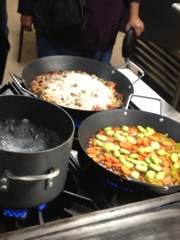 Still, this Meetup happened to be on a night where I had a great childcare option and I knew Anabel didn't come to the United States of America just to see what fabulous juniper and piñon trees we have here (which is pretty much all she sees up where we live). So, I called the organizers, who called the chef, who agreed to make a vegetarian version of his paella. I was thrilled for Anabel, but for me that just meant that I would get to eat the food. I had no illusions that I would participate in the actual cooking of said food because, as anyone who knows me can attest to, in case I haven't mentioned it... I don't cook.

Fast forward to tonight, and as we were getting ready I could tell Anabel was not very excited about the whole thing. Plus, just getting the kids out the door in time to make the class was no small feat. On the drive there I finally said "you know, if it's terrible, we can just leave." She seemed relieved to hear that, since I didn't think she fancied herself as much of a student of the culinary arts either. She cooks just fine in general, but when she was thinking about meeting new people, I imagine a cooking class may not have been top of mind. But I had already paid in advance and the kids were already in childcare, so we went.


Well, it was a fantastic experience! We spoke Spanish and English. We met new people. And we cooked paella with Antonio Luna. And when I say "we cooked paella" I am including the "me" of "we!" In other words, this non-cooker, made Spain-inspired paella... from scratch! (I made sure they took a picture because I don't think my husband will actually believe me!)

As is the case so often, I found my assumptions being challenged tonight. I went into it expecting that I would have to nudge the quiet, seemingly reserved Anabel into participating but quickly discovered that she was the one who was pushing me! You can imagine my surprise when she volunteered to make the second pan (or "paellera" as Antonio called it) full of paella in front of the whole crowd (after seeing the chef cook the dish only once). But that surprise paled in comparison to what I felt when she then volunteered me to do the same. I was really hesitant to step up to the stove, but the peer pressure got the best of me and before I knew it, I was really cooking paella! And, at the risk of sounding like I'm bragging... which I totally am... I think it tasted delicious!

We ate some great food, learned some new skills and Anabel met several friends who invited her to other social outings. (Yay!) Also, as I found myself translating for several people with minimal Spanish skills, I discovered that my own Spanish skills really have improved a lot lately.

In the end it was a delightful, surprising and delicious night which filled both our stomachs and our souls and made me aware of, and grateful for, the amazing diversity which surrounds us.

Posted by Rosa Linda Román at 1:20 AM